Before creating or joining a league you will need to sign up through one of our signin methods.
After you login, you will then be able to create teams and set-up a league based on an upcoming competition. 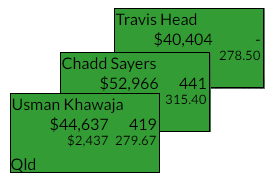 Create a team and select your starting XI and reserves.
Keep tabs on how you are performing through live scoring.
After every round you will have a window of time to update your team through a set number of trades and subbing in your reserves.

Create or Join a league

Create your own league based on an upcoming competition and invite your friends.
Already have a league to join? Use your code to join the league.